But what if a WAF is involved in the DevOps process very early on and not just at the end, at production?

The whole DevOps process only makes sense when all components are part of it! A service can only be successfully complemented by a WAF if the WAF is part of the pipeline from the beginning. I will show how to integrate a WAF, specifically ModSecurity with the Core Rule Set, and its testing into continuous integration.

My three main goals are:

Despite the fact that the number of false positives has been massively reduced in CRS3, there is still the possibility that legitimate traffic from a legitimate user might trigger a CRS rule. This means the user receives a '403 - Forbidden' message and can't use the application. She gets blocked.

This problem is even worse in a DevOps culture. Everything is fully automated and well-tested and in the end, we add a WAF to production and kill the whole positive experience: When production issues arise, it is often too late to find and correct the problems. Instead, an operator is likely to disable the WAF and never re-enable it again. This is because operators have a lot of other work to do and security is not always the top priority.

The solution is to insert the WAF / CRS very early in the DevOps process and give the developers and operators early feedback:

This way, the application's traffic is tested with the CRS and we don't have to fear production issues later on.

As you can read at https://coreruleset.org/installation, it only takes a few steps to install the Core Rule Set. And it gets even easier if you use it in a Docker Container.

I have created a Docker Image that inherits from the official OWASP ModSecurity Core Rule Set Container (https://hub.docker.com/r/owasp/modsecurity-crs/). My image adds an Apache reverse proxy configuration. The reverse proxy configuration is used to put the CRS in front of an application. It also adds some more CRS variables. The CRS container can be found at https://hub.docker.com/r/franbuehler/modsecurity-crs-rp/. This way, the CRS can be very quickly and easily integrated into automated tests.

A special feature of my Docker Container is that it returns the UNIQUE_ID of a blocked request in the 403.html error page. I plan to match this UNIQUE_ID with the application tests in the future.

Here is how to run the container:

The following environment variables are configurable:

Explanations of the individual parameters can be found in the main CRS configuration file crs-setup.conf (current version: https://github.com/coreruleset/coreruleset/blob/v3.0/master/crs-setup.conf.example) or as part of the tutorial series about ModSecurity and CRS at netnea.

I have implemented a proof of concept in CircleCI. Of course, the continuous integration can also be implemented on TravisCI, Jenkins, and so on. Then I used TestCafe to write the application tests. It's a Node.js tool for performing end-to-end tests. 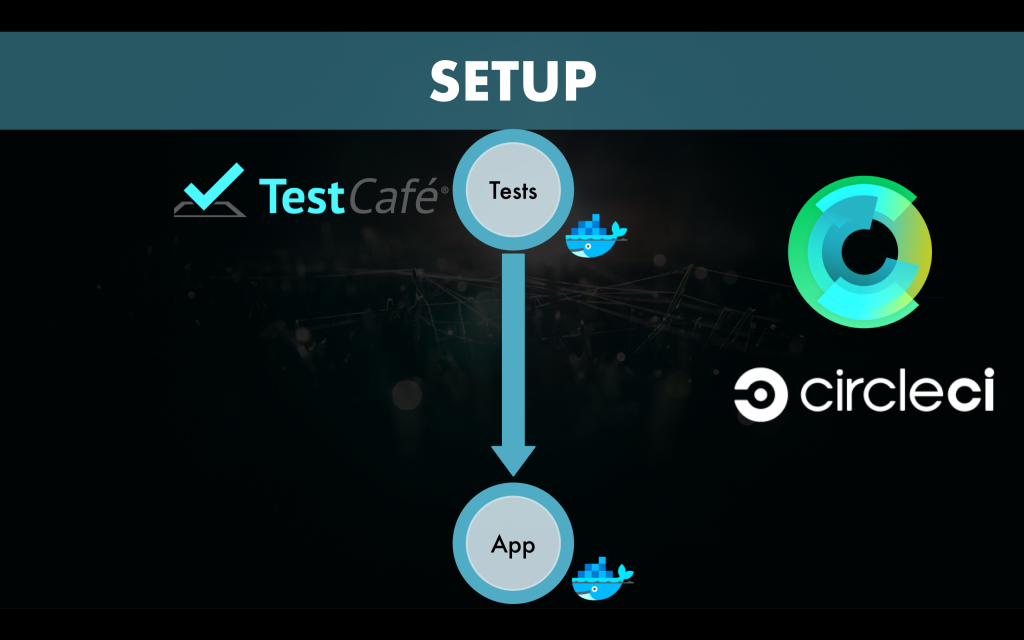 As a next step, we put CRS in front of the same application in order to funnel the same tests through the WAF. We expect the application tests to still succeed and the log to remain empty. This would confirm that no CRS rule were triggered by the tests. 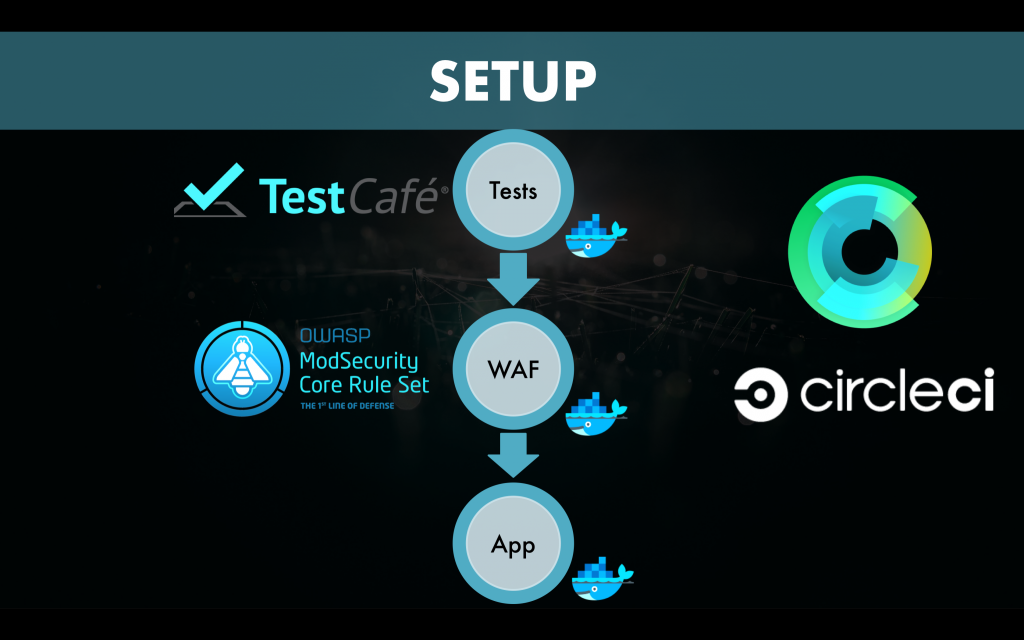 Each of these components runs in a separate Docker container.

The time taken to pull and start the Core Rule Set container and to run the application tests are only a small part (approx. 1 minute and 30 seconds in this PoC) of the overall testing process (approx. 3 minutes and 30 seconds in my example).

The message here is: We do not waste a lot of time but get a lot of extra security.

In summary, the CircleCI configuration .circleci/config.yml consists of the following steps:

For all details see:

Let's go through the steps and take a closer look:

First, we have to tell CircleCI which image to use for the primary Docker Container. That is where all of the following steps are performed.

Then we want CircleCI to install some dependencies, docker-compose and docker.

In the next step, we start the application in a container.

Then we start our CRS container in front of the application we have just started above.

In this step, we have the ability to tune the ModSecurity / CRS setup. We exclude certain rules or we hide certain parameters from the set of over 150 rules to avoid false positives and to keep the logfile empty.

We repeat the application tests, but this time via the WAF / CRS. This is done by pointing the tests against the TCP port of the CRS container. Of course, these tests must be successful, too. In addition to the existing application tests, we add a WAF test to be sure that the CRS really triggers: We send an Cross Site Scripting (XSS) payload to a search form and expect the CRS to block the attack.

In the end, we check the results: The ModSecurity log should be empty. This means that no CRS rule was triggered by the standard application tests.

We also test that our intentionally added XSS string appears in the log. If it does not appear, either the tests have been aborted or the CRS did not work properly and we should look into this.

This PoC covers the continuous integration part. But of course, it could be extended to an entire deployment pipeline.

To do all this in production, I recommend the following:

Take the CI pipeline and the Docker container of this PoC and customize it for your organization. This PoC is meant to give you free samples of how to implement a pipeline with a WAF in it.

The backend application I tested in this PoC is the Pixi application from the OWASP project DevSlop, where I am also a part of the team.
The OWASP DevSlop project consists of several modules, all aimed at either presenting proof-of-concept DevSecOps pipelines, or insecure implementations of DevOps to teach better practices.
http://devslop.co
https://www.owasp.org/index.php/OWASP_DevSlop_Project

The CircleCI configuration can be found on GitHub. Please take this example and customize it for your organization.
https://github.com/DevSlop/pixi-crs/blob/master/.circleci/config.yml

My CRS Docker image can be found at:
https://hub.docker.com/r/franbuehler/modsecurity-crs-rp/

One of the triggers of the idea behind this blog post is the book 'Securing DevOps' by Julien Vehent:
https://www.manning.com/books/securing-devops.

Of course, every CRS user knows the ModSecurity Guides from Christian Folini. They provide the basic knowledge to understand the concepts and inner working of CRS and ModSecurity:
https://netnea.com/apache-tutorials.