We have set up a public CRS Sandbox which you can use to send attacks at the CRS. You can choose between various WAF engines and CRS versions. The sandbox parses audit logs and returns our detections in an easy and useful format.

The sandbox is useful for:

The sandbox is located at https://sandbox.coreruleset.org/.

An easy way to use the sandbox is to send requests to it with curl, although you can use any HTTPS client.

The sandbox has many options, which you can change by adding HTTP headers to your request. One is very important so we will explain it first; this is the X-Format-Output: txt-matched-rules header. If you add this header to your request, the sandbox will parse the WAF’s output, and return to you the matched CRS rule IDs with descriptions, and the score for your request.

In this example, we sent ?file=/etc/passwd as a GET payload. The CRS should catch the string /etc/passwd which is on our blocklist. Try out the command in a terminal now if you like!

You can send anything you want at the sandbox, for instance, you can send HTTP headers, POST data, use various HTTP methods, et cetera.

The sandbox will return a 200 response code, no matter if an attack was detected or not.

The sandbox also adds a X-Unique-Id header to the response. It contains a unique value that you can use to refer to your request when communicating with us. With curl -i you can see the returned headers.

It’s useful to know that you can tweak the sandbox in various ways. If you don’t send any X- headers, the sandbox will use the following defaults.

Let’s say you want to try your payload on different WAF engines or CRS versions, or like the output in a different format for automated usage. You can do this by adding the following HTTP headers to your request:

The header names are case-insensitive.

Tip: if you work with JSON output (either unmodified or matched rules), jq is a useful tool to work with the output, for example you can add | jq . to get a pretty-printed JSON, or use jq to filter and modify the output.

Let’s say you want to send a payload to an old CRS version 3.2.1 and choose Nginx + ModSecurity 3 as a backend, because this is what you are interested in. You want to get the output in JSON because you want to process the results with a script. (For now, we use jq to pretty-print it.)

Let’s say you are working on a vulnerability publication and want to add a paragraph to explain how CRS protects (or doesn’t!) against your exploit. Then the txt-matched-rules-extended can be a useful format for you.

The sandbox consists of various parts. The frontend that receives the requests runs on Openresty. It handles the incoming request, chooses and configures the backend running CRS, proxies the request to the backend, and waits for the response. Then it parses the WAF audit log and sends the matched rules back in the format chosen by the user. 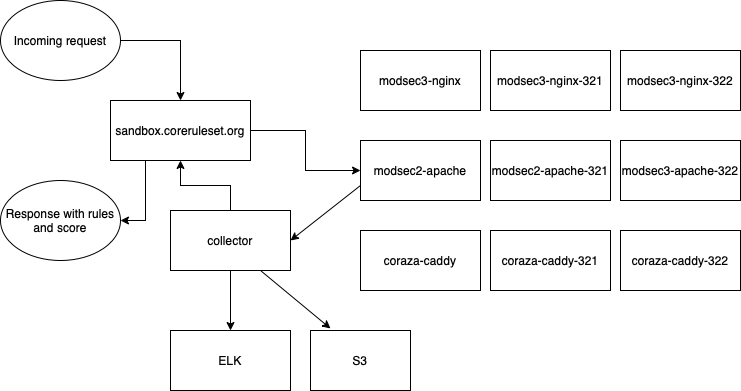 There is a backend container for every engine and version. For instance, one Apache with CRS 3.2.2, one with CRS 3.2.1, et cetera… These are normal webserver installations with a WAF and the CRS.

The backend writes their JSON logs to a volume to be read by a collector script and sent to S3 bucket and Elasticsearch.

The logs are parsed, and values like User-Agent and geolocation are extracted. We use Kibana to keep an overview of how the sandbox is used, and hopefully gain new insights about attacks.

In some cases, the sandbox will not properly handle and finish your request.

If you have any issues with the CRS sandbox, please open a GitHub issue at https://github.com/coreruleset/coreruleset/issues and we will help you as soon as possible.

If you have suggestions for extra functionality, a GitHub issue is appreciated.

The following notes are handy for our team maintaining the sandbox.

To add a new backend: