Paranoia levels are an essential concept when working with the Core Rule Set. This page explains the concept behind paranoia levels and how to work with them on a practical level.

The paranoia level (PL) makes it possible to define how aggressive the Core Rule Set is. Paranoia level 1 (PL 1) provides a set of rules that hardly ever trigger a false alarm (ideally never, but it can happen, depending on the local setup). PL 2 provides additional rules that detect more attacks (these rules operate in addition to the PL 1 rules), but there’s a chance that the additional rules will also trigger new false alarms over perfectly legitimate HTTP requests.

This continues at PL 3, where more rules are added, namely for certain specialized attacks. This leads to even more false alarms. Then at PL 4, the rules are so aggressive that they detect almost every possible attack, yet they also flag a lot of legitimate traffic as malicious.

A higher paranoia level makes it harder for an attacker to go undetected. Yet this comes at the cost of more false positives: more false alarms. That’s the downside to running a rule set that detects almost everything: your business / service / web application is also disrupted.

When false positives occur they need to be tuned away. In ModSecurity parlance: rule exclusions need to be written. A rule exclusion is a rule that disables another rule, either disabled completely or disabled partially only for certain parameters or for certain URIs. This means the rule set remains intact yet the CRS installation is no longer affected by the false positives.

Depending on the complexity of the service (web application) in question and on the paranoia level, the process of writing rule exclusions can be a substantial amount of work.

This page won’t explore the problem of handling false positives further: for more information on this topic, see the appropriate chapter or refer to the tutorials at netnea.com.

Description of the Four Paranoia Levels

The CRS project views the four paranoia levels as follows:

It’s important to think about a service’s security requirements. The difference between protecting a personal website and the admin gateway controlling access to an enterprise’s Active Directory are very different. The paranoia level needs to be chosen accordingly, while also considering the resources (time) required to tune away false positives at higher paranoia levels.

Running at the highest paranoia level, PL 4, may seem appealing from a security standpoint, but it could take many weeks to tune away the false positives encountered. It is crucial to have enough time to fully deal with all false positives.

Failure to properly tune an installation runs the risk of exposing users to a vast number of false positives. This can lead to a poor user experience, and might ultimately lead to a decision to completely disable the Core Rule Set. As such, setting a high PL in blocking mode without adequate tuning to deal with false positives is very risky.

If working in an enterprise environment, consider developing an internal policy to map the risk levels and security needs of different assets to the minimum acceptable paranoia level to be used for them, for example:

If using a native Core Rule Set installation on a web application firewall, the paranoia level is defined by setting the variable tx.paranoia_level in the file crs-setup.conf. This is done in rule 900000, but technically the variable can be set in the Apache or Nginx configuration instead.

If running CRS where it has been integrated into a commercial product or CDN then support varies. Some vendors expose the PL setting in the GUI while other vendors require a custom rule to be written that sets tx.paranoia_level. Unfortunately, there are also vendors that don’t allow the PL to be set at all. (The CRS project considers this to be an incomplete Core Rule Set integration, since paranoia levels are a defining feature of the Core Rule Set.)

At the conceptual level, these two ideas could be mixed if the goal was to create a particularly granular security concept. For example, saying “we define the anomaly threshold to be 10, but we compensate for this by running at paranoia level 3, which we acknowledge brings more rule alerts and higher anomaly scores.”

This is technically correct but it overlooks the fact that there are attack categories where CRS scores very low. For example, there is a plan to introduce a new rule to detect POP3 and IMAP injections: this will be a single rule, so, under normal circumstances, an IMAP injection would never score more than 5. Therefore, an installation running at an anomaly threshold of 10 could never block an IMAP injection, even if running at PL 3. In light of this, it’s generally advised to keep things simple and separate: a CRS installation should aim for an anomaly threshold of 5 and a paranoia level as deemed appropriate.

Moving to a Higher Paranoia Level

Consider an example successful CRS installation: it operates at paranoia level 1, a handful of rule exclusions are in place to deal with false positives, and the inbound anomaly score threshold is set to 5 which blocks would-be attackers immediately. Things are running smoothly at paranoia level 1, but imagine that there’s now a requirement to increase the level of security by raising the paranoia level to 2. Moving to PL 2 will almost certainly cause new false positives: given the strict anomaly score threshold of 5, these will likely cause legitimate users to be blocked.

There’s a simple, but risky, way to raise the paranoia level of a working and tuned CRS installation: raise the anomaly score threshold for a period of time, in order to account for the additional false positives that are anticipated. Raising the anomaly score threshold will allow through attacks that would have been blocked previously. The idea of decreasing security in order to improve it is counter-intuitive, as well as being bad practice. 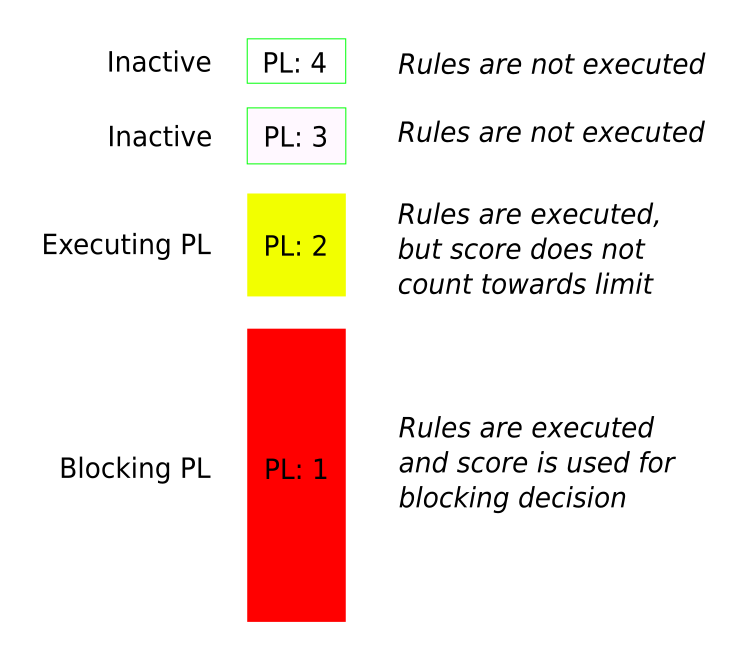 Moving to a Lower Paranoia Level

For a slightly longer explanation of paranoia levels, please refer to our blog post on the subject. The blog post also discusses the pros and cons of dynamically setting the paranoia level on a per-request basis, firstly by geolocation (i.e. a lower PL for domestic traffic and a higher PL for non-domestic traffic) and secondly based on previous behavior (i.e. a user is dealt with at PL 1, but if they ever trigger a rule then they’re handled at PL 2 for all future requests).